King Khalid University, represented by the Deanship of Admissions and Registration, announced that the admission period for undergraduate and diploma programs for the 1440-41 AH academic year will continue to the 30th of Shawwāl.

Dean of Admissions and Registration, Dr. Abdulmohsen Algarni, stressed the importance of following procedures, emphasizing that the university has received an estimated 18,000 admission requests. He also explained that the admission system allows applicants to change and edit admissions information and desired fields. Dean Algarni added that the university is keen to apply all applicable regulations and conditions to candidates during all stages of the process.

Dean Algarni pointed out that the university has set the date for students to collect their university identification cards and schedules, which will start on the 5th of Dhū al-Qa‘dah for undergraduate program students and the 9th of Dhū al-Qa‘dah for diploma program students. Of noteworthy mention, the university will announce the open admissions period for the remaining seats in the near future

Given that digital transformation is a central focus for the university, Dean Algarni confirmed that the admissions process is fully electronic and related that the acceptance rates will be announced on the university's homepage following each stage of admission. The Deanship of Admission and Registration also invites all applicants to benefit from the electronic services provided to raise questions or inquiries.

King Khalid University, represented by the Quality Assurance Unit, will host a workshop entitled 'Quality Management System Consultant' on the 27th of Shawal 1440 AH at the main campus.

The workshop aims to prepare and train 30 candidates from various departments and deanships to master the IOS Quality Assurance System, which qualifies the candidates as IOS consultants according to IOS 9001: 2015 International Quality Standards.

Dean of Academic Development and Quality, Dr. Abdulaziz Al-Hajri, stressed that the workshop will contribute positively on both a personal and institutional level, pointing out that the workshop has been previously held and that 50 candidates were trained as IOS quality consultants.

Dr. Ahmed Ataif Al-Shehri explained that the participation is a result of His Excellency Rector Al-Solamy's continuous support, noting that the Tehama Campus will hold a number of workshops and training courses.

Of noteworthy mention, the university has organized a number of activities to welcome and host the guests and visitors of Asir as part of its leading role in the 'Hospitality Initiative' for the 1440 AH summer season.

King Khalid University Rector, His Excellency Prof. Falleh Al-Solamy, was handed the gold and silver excellence plaques that were awarded to the Scouts Team for its latest activities supervised by the Deanship of Student Affairs.

Dean of Student Affairs, Dr. Abduallah Al-Atheed, explained that the deanship's scouts team had received numerous excellence awards during the past year, which included the Golden Plaque for Ramadan Public Service and the Silver Plaque for the National Environment Protection Project. Dean Al-Atheed pointed to the importance of the participation in public and community activities, which are in accord with the Kingdom's 2030 vision and supports community service and student sense of community responsibility.

At the beginning of the meeting, His Excellency Rector Al-Solamy welcomed Minister of Education Assistant, His Excellency Dr. Saeed Al-Faheed, and his accompanying delegation. He then followed by thanking His Excellency the Minister of Education on behalf of King Khalid University for his visit and for the support and care the university receives from the Ministry of Education. After, a short film was displayed that included the university's academic achievements as well as its most significant accomplishments in the field of community service, innovation and research. The film also introduced the university's initiatives, projects and future direction, which aligns with the Kingdom's 2030 vision.

Being thoroughly impressed with his visit, His Excellency the Minister of Education inaugurated five quality initiatives, which were represented in the university's summer programs, the KKUx Entrepreneurship Platform, a Chinese Language Introduction Course, the Electronic and Coding Game Club Camp, and the Design Thinking Workshop.

On the topic of quality initiatives, His Excellency the Minister of Education received a brief overview of what they will include. The second edition of the summer training program is a university initiative that supports higher education through offering an extensive eight-week training program that includes 320 training hours and an average of a 40 hour per week training program for each student. The summer training program provides an entrepreneurship course, a creative thinking course, a solving various complex problems course, a modern technologies course, an intensive English language training program, field visits to companies, factories, laboratories, hospitals, media centers, and leading institutions. Of noteworthy mention, the program also includes international objectives with 165 students from 10 colleges who will receive training in 9 international training centers in Britain, Ireland, Wales, and the United States.

Of noteworthy mention, the Coding Camp was first launched last summer and included the participation of 25 candidates who received extensive training under the supervision of university professors and technical specialists. The Coding Camp boasted excellent outcomes that included 5 startup companies, 3 tech companies, and the Electronic Game Club initiative. The Electronic Game Club Initiative is lead by students, who over the last year, hosted 32 gaming activities and workshops for approximately 1,600 students.

The Design Thinking Workshop utilizes empathetic, creative, and analytical skills to solve problems. It serves to design meaningful solutions to urban challenges in Abha by working with residents and expats. The main objectives of this workshop are underscored by the collaboration between King Khalid University, represented by Design Valley, and the German Academy of Sciences.

At the end of the meeting, Dr. Abdullah Al-Kasi, Director of the Saudi Scientific Society for Teachers (JASM), presented His Excellency the Minister of Education with an honorary society membership. 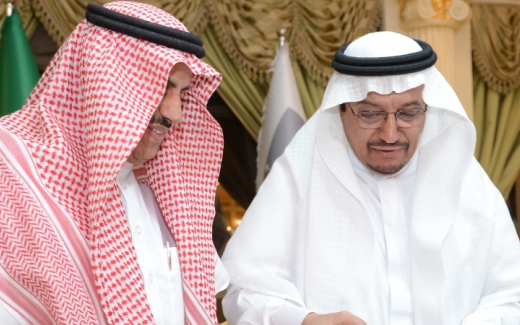 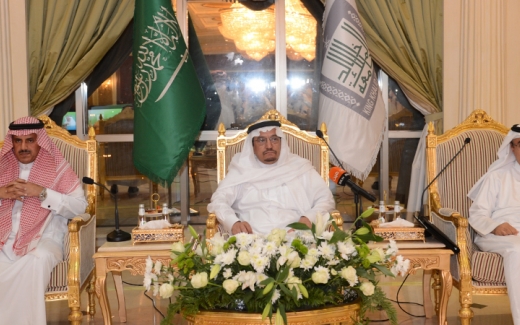 The students were introduced to the summer school system, agenda, and topics on number theory, differential geometry, and dynamic systems. All in attendance expressed their excitement on what they will learn and achieve.

Of noteworthy mention, the summer school launched its activities last week and will continue to the 19th of Shawal 1440 AH.

King Khalid University Rector, His Excellency Prof. Falleh Al-Solamy, welcomed Aba'aa Charity Association Asir General Director, Dr. Saad Al-Amer, on the 15th of Shawwāl 1440 AH. During the meeting, the two parties discussed a variety of topics and the possibility of future partnerships and initiatives that will serve the general public in the region.

The Deanship of Admissions and Registration announced the opening of electronic admissions to undergraduate and graduate programs for the 1441 AH academic year. Admissions will begin on the 15th of Shawwāl and will continue to the 30th of Shawwāl 1440 AH.

Dean of Admissions and Registration, Dr. Abdulmohsen Algarni, stressed that all applications will be received electronically, adding that prospective students need to apply through the Academia Portal via the following link: click here.

Dean Algarni: All applications will be received electronically.

On the topic of admission, Dean Algarni pointed out that the admission process is centrally focused on the eligibility of the candidates, fields of study, and available seats in the colleges desired pursuant to the university's acceptance strategy. He followed by explaining that the names of the students accepted in the first admissions stage will be announced on the 5th of Dhū al-Qa‘dah 1440 AH, the second on the 9th of Dhū al-Qa‘dah, and the third on the 12th of Dhū al-Qa‘dah.

Dean Algarni revealed that the admission to a number of new departments is now open as follows:

In his closing remarks, Dean Algarni stressed that the admissions process at King Khalid University is entirely online and will not include any exceptions, adding that all admissions requirements, procedures, and important dates are available on the university website. The Deanship of Admissions and Registration will respond to all questions and inquiries through the Tawasol application on the university website he related. 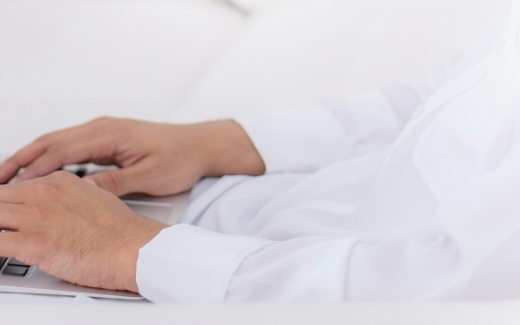 King Khalid University, represented by the Deanship of Student Affairs, received the Silver Plaque Award for the National Environment Protection Project. The university won the award in an intense competition that included all Saudi Universities, education departments, and participating entities.

Dean of Student Affairs, Dr. Abdullah Al-Atheed, explained that the university's participation is a result of directives to fulfill its role in motivating and encouraging social responsibility. Moreover, it also comes in line with Saudi Vision 2030, which has set environmental and sustainable development as one of its main objectives.

King Khalid University, represented by the Department of Mathematics at the College of Science, inaugurated the summer mathematics school on Sunday morning at the main campus.

Vice Rector of Graduate Studies and Scientific Research, Prof. Saad Al-Amri, explained that this summer program is a unique opportunity to receive specialized academic training, emphasizing that these programs bridge between different stages of knowledge to provide a deeper view into specific fields. Vice Rector Al-Amri welcomed the participants and guests of the summer school and wished them a wonderful stay in the city of Abha, adding that King Khalid University Rector, His Excellency Prof. Falleh Al-Solamy, is keen to devote all efforts to the service of the summer school guests and participants.

At the inauguration of the program, College of Science Dean, Dr. Ali Al-Shati, stressed that the summer school is a unique opportunity that the university is keen to deliver with optimal learning outcomes. Following after, Dr. Ibrahim Al-Menjhi announced the topics to be discussed and the names of the participants.

Dr. Ali Al-Khalidi, Professor of Mathematics, Head of the Summer Camp Scientific Committee, said: "The summer school targets postgraduate students, faculty members, and researchers. Innovative scientific topics and partnership opportunities with leading researchers in the field of mathematics will form the rigorous educational environment we are looking to provide. The program curriculum includes number theory, differential geometry, dynamic systems, and a host of other mathematics subjects."

Of noteworthy mention, the school, which is the first in the Kingdom, aims to establish research partnerships with distinguished researchers from around the world. 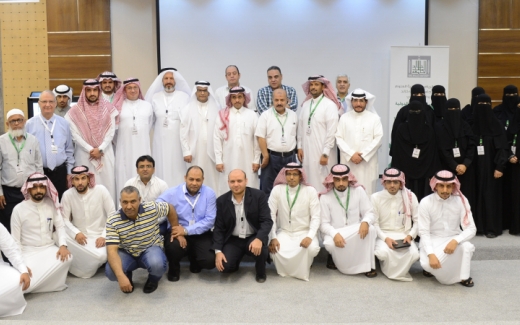 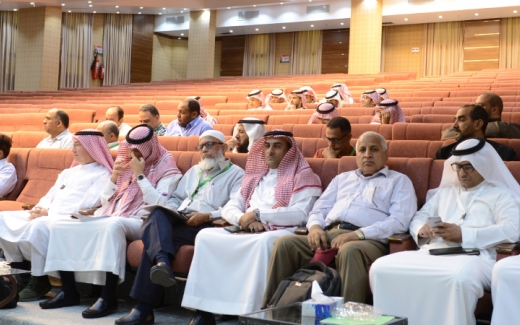