Under the patronage of His Royal Highness, Prince Turki bin Talal bin Abdulaziz Al Saud, Governor of the Asir Region and Honorary President of the Scholarship Charitable Fund of King Khalid University, King Khalid University Rector, His Excellency Prof. Falleh Al-Solamy, conducted a ceremony in which he provided further details about the new university scholarship initiatives.

In his opening remarks, the Rector thanked His Royal Highness for his patronage and expressed deep gratitude for the numerous charitable organizations, private businesses and scholarship students representing 44 countries in attendance at the event. His Excellency stated that, because of the scholarship charitable fund, the university will be able to expand the program, and recruit additional, outstanding students from all over the world. 'Our objective is to host 2,000 international scholarship students and provide them with an exemplary academic and social environment to further their educational and personal endeavors' he said.

Rector Al-Solamy: Our objective is to host 2,000 international scholarship students and provide them with an exemplary academic and social environment to further their educational and personal endeavors.

General Supervisor of the Department of Scholarships, Dr. Saeed Al Shahrani, remarked that the charitable fund is to advance education and scientific knowledge while supporting and promoting Islamic social and cultural values. This will allow for technological innovation while enhancing international cooperation.

Representing the scholarship students, Khalid Yasin from the State of Tanzania thanked King Khalid University for its support. He also thanked the charitable fund along with its supporters for ensuring the bright future of the scholarship program.

During the ceremony, the University Rector signed memorandums of understanding for cooperation with a number of charitable organizations including:

At the end of the ceremony, Rector Al-Solamy honored the members of the Board of Trustees of the Fund and received a commemorative plaque. 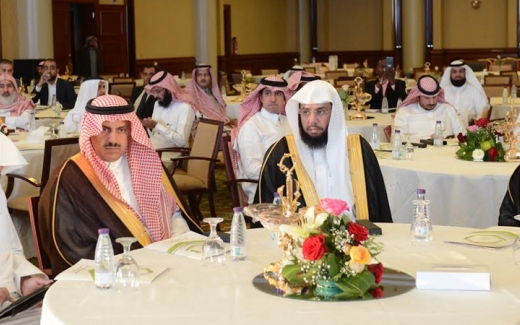 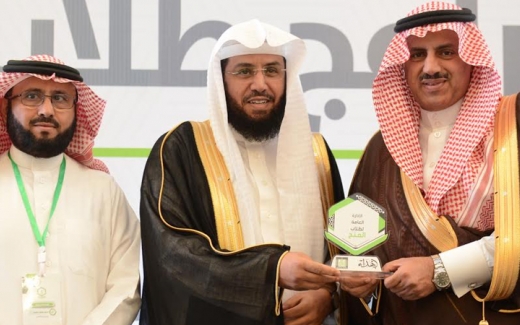 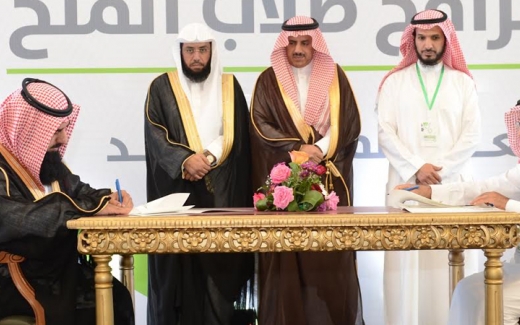 King Khalid University Rector, His Excellency Prof. Falleh Al-Solamy, hosted a sustainable agriculture forum in cooperation with the Ministry of Environment, Water and Agriculture. The focus of the forum, organized the Institute for Research Consultancy Studies, was rehabilitating farmland in the southern region and sustainable water resources for agricultural purposes.

Dean of the Institute for Research and Consultative Studies, Dr. Abdul Latif Al-Hadithi, is the lead university consultant on agricultural rehabilitation and sustainability. In his opening remarks, Dean Al-Hadithi described the partnership between King Khalid University and the Ministry of Environment, Water and Agriculture. He explained that the university is using its resources and scientific prowess to help improve agriculture in the region under the guidance of the Ministry. 'The farm rehabilitation effort relies primarily on rainwater harvesting to improve and conserve agricultural lands adversely impacted by groundwater depletion and past unsustainable development', he said. The Dean also noted that the purpose of the forum was to bring all stakeholders together and review the theoretical and practical aspects of the project. This will preserve and allow the historically agricultural region to flourish in perpetuity. He also thanked His Royal Highness, the Governor of the Asir region and His Excellency Rector Al-Solamy for their patronage and support of this important program.

The forum also included a number of other presentations as follows: 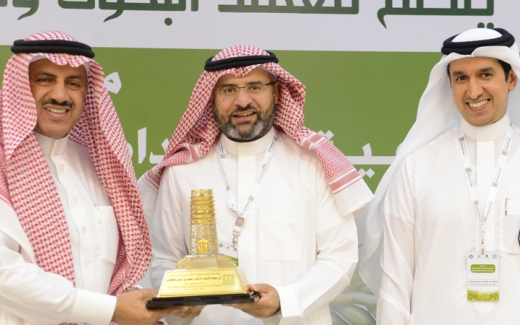 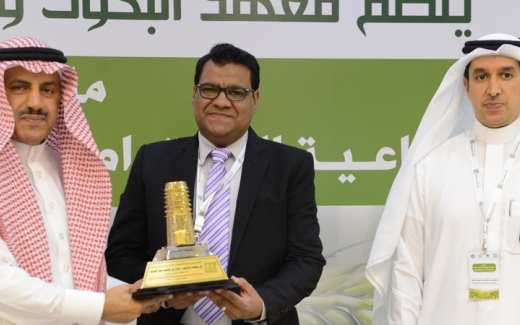 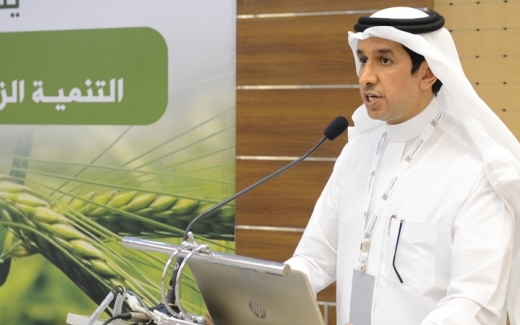 The Media and Communications Department recently conducted six community service/public outreach programs in the Asir region. These initiatives included various efforts designed to improve the lives of our citizens and the environment. Each program began as a senior student graduation project, which the university sponsored for public consumption. These efforts were coordinated by departmental supervisor Mrs. Nora Amer.

Student Reem Salem Al-Faifi created a campaign to raise awareness on the dangers of social media. She discussed the ways in which impressionable teenagers are sometimes influenced by popular social media figures in negative or even destructive ways. She offered the public various solutions based on proper monitoring of internet usage and education.

Student Huda Asiri ran an awareness campaign on female depression. She focused on the causes, symptoms and potential treatment of depression in women and girls. She placed special emphasis on how family and friends can recognize and intervene when a female is depressed. Ms. Asiri also reviewed the potential consequences of chronic depression in females.

Student Azhar Al-Qahtani conducted a campaign on female empowerment in the workforce. She reviewed how women play an increasingly important role in economic development and other aspects of the national strategy. Ms. Al Qahtani then explained how female empowerment in the workplace was an important part of making sure that women contribute to increases in productivity in all sectors. She reviewed ways in which female employees can build character and enhance their self-confidence in all aspects of their professional and civic lives.

Graduating student Sara Al-Arbie ran a workshop on the importance of volunteerism. She raised public awareness on the need for people to do their part in enhancing the well-being of their fellow citizens at the local, regional and national levels. In her presentation, she noted that helping others benefits both the people assisted and those who volunteer. She explained that people who volunteer their time for the public good find more personal satisfaction and meaning in their own lives.

Student Rahaf Mubark is running a program titled 'Plant'. Her project aims to improve the environment and beautify the region by cleaning up and nurturing the indigenous flora and fauna in the area. The coalition raises awareness of the need for and benefits of an ecologically healthy environment.

Finally, student Samira Al-Zehan conducted a campaign titled 'Your Secret Power'. The purpose of this campaign is to raise awareness of the rights conferred upon Saudi women with keynote speakers Mohammed Awad Al-Fiih, legal advisor, and lawyer Al-Qahtani joining in.

The university congratulates these students for their hard work and dedication to public causes. More than 1,300 citizens benefited from these 6 programs.

The purpose of the partnership is to exchange academic and scientific information in the fields of general healthcare and applied medicine. Rector Al-Solamy explained that 'Sharing resources will allow scientific research efforts to advance more quickly and efficiently. In addition, joint development of academic programs will lead to better learning outcomes in both institutions'.

The ceremony participants expressed their satisfaction in beginning this arrangement, and stated that they looked forward to a long and productive working relationship between the schools.

'Tawasul' is an SMS/E-Mail service that facilitates communication among university management, faculty, staff and students via short cell and Internet-based messages. In its annual report, the Ministry of Education ranked King Khalid University's 'Tawasul' system first in overall performance out of all other institutions in the Kingdom.

King Khalid University Rector, His Excellency Prof. Falleh Al-Solamy, commended the Center for Communications for the hard work and diligence that made 'Tawasul' the top national performer. Communications Center Director, Shaker Al-Amer, thanked the Rector for his ongoing support of the unit, and pledged his continued commitment to quality improvement. Director Al-Amer also thanked his team for their dedication and efforts to ensure effective communications at the university.

The university plans on greatly expanding 'Tawasul'. The objective is to provide this electronic platform to share information among all Saudi universities, private schools, associated government agencies and to establish a direct link to the Ministry of Education. This is a productivity enhancement included in Vision 2030 and its appendant documents. Of noteworthy mention, the university manages 16 coordinators assigned to the project.

Among All Universities in the Kingdom 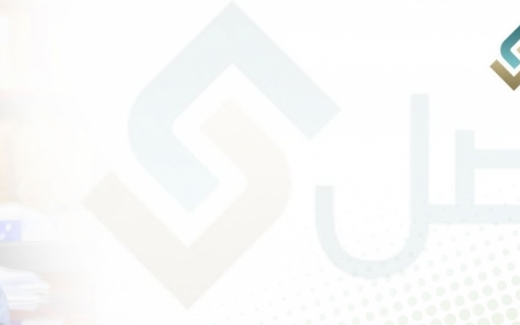 Vice Rector of Female Student Affairs, Dr. Khlood Abu Melha, hosted several student affairs directors from universities around the Kingdom at the closing ceremony of student activities at King Khalid University for this academic year. In her opening remarks, Dr. Abu Melha explained that her mission is to provide the necessary environment and tools for outstanding student achievement and continuous improvement of major university functions. Vice Dean of Female Student Affairs, Dr. Fatimah Shaban, further explained that all university student affairs efforts are an investment in the professional and civic development of future graduates. Student affairs professionals are there to encourage academic achievement, and support students' latent talents. She also related that young people are the future of the nation and a necessary element of the national development strategy.

In addition, awards were conferred upon some of the outstanding clubs and school organizations operating among the universities including:

At the conclusion of the ceremony, the Dean and Vice Dean of Student Affairs thanked His Excellency Rector Al-Solamy as well as the organizers and participants.

The Director of the University Medicine Council recently visited University Medical City. The purpose of the visit was to tour the grounds and new facilities. Vice Rector of Construction Projects, Dr. Mohammad Adam, greeted the entourage. The Vice Rector and a team of project engineers and construction specialists showed the Medicine Council Director the new campus. The project team also briefed the Director on the progress towards completion of the new hospital, medical buildings and ancillary infrastructure.

King Khalid University's Medical City will provide state of the art medical services to the region's growing population. Also, the medical facilities are expected to generate a large number of new jobs, and lead to a significant increase in economic activity in and around the campus. It will be equipped with the latest technologies in the medical field, with one of the highest bed capacities of any university hospital in the Middle East. The project comports with Vision 2030, which stresses the importance of the health care sector and public health services.

Dean of the College of Medicine, Prof. Suliman Al-Humayed, and the members of the College Council expressed their gratitude for the Medical City project, and the great benefits which will result from its operations.

The 1439-40 second semester final exams season for general preparation courses is underway. On this occasion, Dean of e-Learning, Dr. Fahad Al-Ahmari, highlighted that the university has taken great leaps in the field of electronic tests, reporting that more than 3,000 students from the College of Humanities took English language skills and Arabic language tests.

Dean Al-Ahmari explained that electronic tests are characterized by the ability to build test banks for questions and random selection. 'With the appropriate measures and safeguards, the level of testing will be enhanced while the rate of irregularities will decrease' he concluded.