The Faculty of Languages ​​and Translation held an orientation meeting for new students on Tuesday morning. The main objective of the meeting was to ease the transition from high school into college, have students meet other students, and become familiar with campus services and regulations.

During the ceremony, students met with Faculty of Languages and Translation Dean, Dr. Abdullah Al-Melhi, who welcomed the students and highlighted the college, its departments, clubs and units, wishing them success and productivity in their academic year.

In the same context, Dean of the College of Arts and Science at Tanumah, Prof. Dr. Abdulaziz Al-Faqih, hosted the orientation and welcomed the new students.

King Khalid University Rector Prof. Falleh Al-Solamy signed a partnership agreement with Al Mubarakah Tech Company on behalf of the university. This initiative is in furtherance of the university's strategic plan to work in close cooperation with both public and private entities in the community. These alliances between educational and business organizations will be mutually beneficial. Local organizations can utilize the university's resources and expertise, while King Khalid University will be able to more closely match the needs of the local and national labor market.

The two entities will collaborate on: Technical programs, events, projects, initiatives and scientific publications. The parties will also cooperate in developing management systems, software and quality assurance programs to support various joint projects. Professionals from industry, university faculty and students will all participate in the venture.

Vice Rector of Business and Knowledge-Economy, Dean of the Institute of Research and Consultancy Studies, Dr. Abdullatif bin Ibrahim Al-Hadithi oversaw program development for the university. Al Mubarakah Tech Company President, Eng. Majed Bin Saad Al-Osaimi, represented the company. Vice Rector Al-Hadithi explained that the agreement aims to accelerate the pace of digital transformation and advanced technology development. Moreover, the initiative will assure that technical achievements are in accord with the Kingdom's cultural principles and customs. The university expects to further expand its community service efforts as part of this agreement. 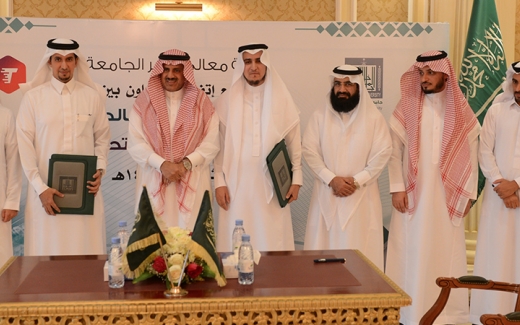 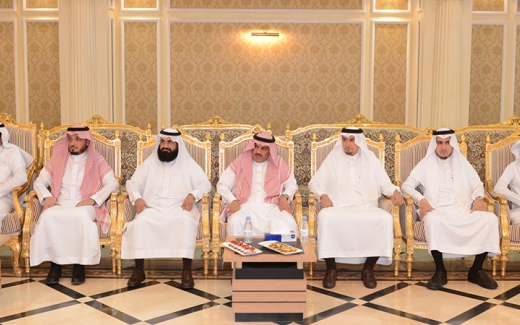 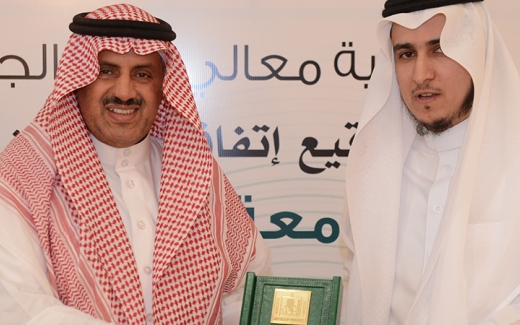 His Excellency, King Khalid University Rector Prof. Falleh Al-Solamy, affirmed the importance of the university's global media presence. Last week he met with representatives of the university Media Center at the main campus to discuss both recent and upcoming media initiatives. The consensus among the participants is that the university will continue to produce current and high-quality content across several media platforms in order to further enhance King Khalid University's standing among global educational institutions.

Rector Al-Solamy explained that in today's interconnected world, a university must be media savvy. Showcasing the university's capabilities and activities is the best way to attract the best students and faculty members. In support of this policy, the university maintains four active Twitter accounts for university departments (Admissions, Graduate Studies, Student Affairs, Community Services) in Arabic. The departmental accounts focus on activities and issues of interest to those within the Kingdom. Also, the university maintains two general interest, foreign language Twitter accounts (English and French) for international consumption. The Media Center has primary responsibility over these social media accounts.

Al-Solamy: "… in today's interconnected world a university must be media savvy. Showcasing the university's capabilities and activities is the best way to attract the best students and faculty members."

The Rector noted that General Directorate of Information Technology is in the process of preparing a comprehensive electronic service platform service system. The purpose of this new system is to organize and streamline the flow of information generated on social media. He also stated that the university is also pursuing initiatives to expand the university's presence on other media platforms.

The Rector honored all of the faculty and staff members of the Media Center for their continuing hard work. General Supervisor of the Media Center, Dr. Mufleh Al-Qahtani thanked the Rector for his patronage and support. Al-Qahtani reiterated the importance of social media to raise awareness of the university and burnish its global image. He also noted that success in the media is an inter-departmental effort which requires input from other functional units. Media Center Assistant Supervisor, Mrs. Noura Abdul Qader Amer, confirmed that the center is currently working on a number of publications to add to the university's media portfolio. 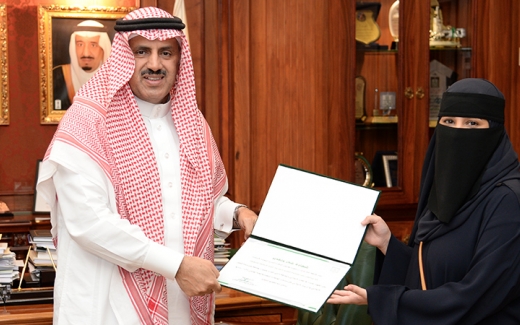 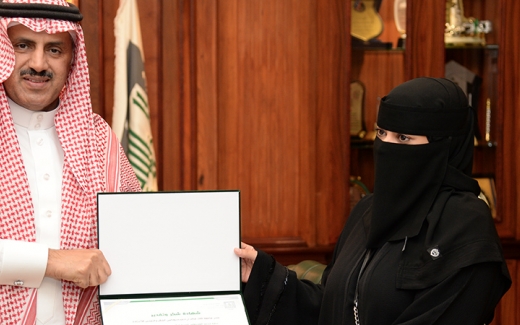 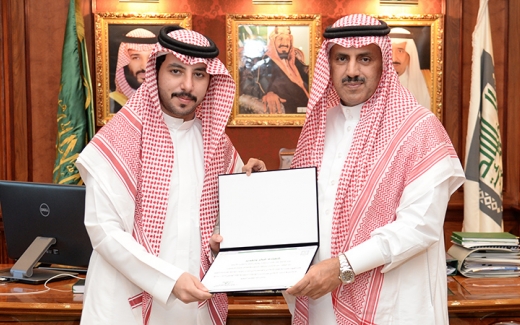 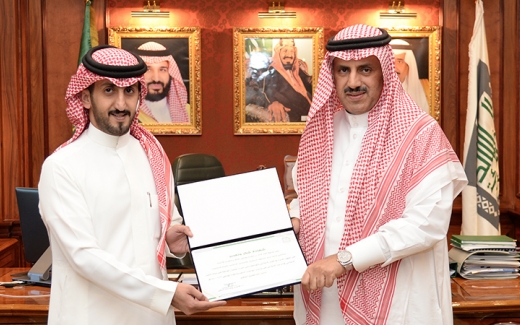 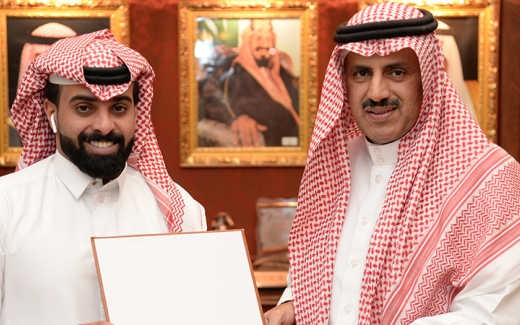 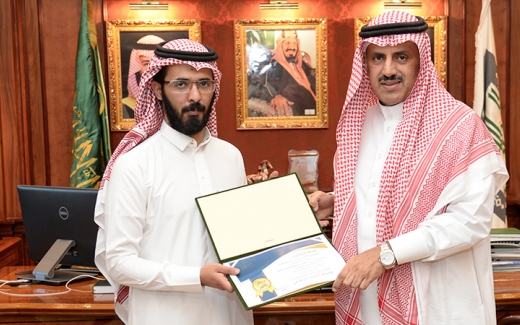 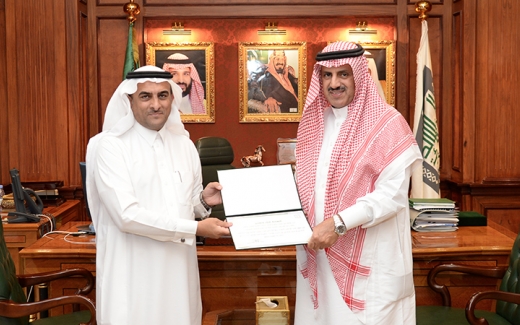 The Deanship of Admissions reports that the academic schedules for the fall semester are complete and final. All of the colleges and departments cooperated in developing more than two hundred discrete timetables university-wide.

Dean of Admissions and Registration, Dr. Abdulmohsen Algarni, explained that the university tries to accommodate student schedule needs via the electronic (Academia) self-service portal. The Registrar received in excess of fifteen hundred schedule change requests this term. Dean Algarni confirmed that the Deanship has made several improvements to the registration process this year. All entering students received university identification already and schedules were distributed in advance. He wished the new and returning students a successful academic year, and thanked His Excellency Rector Al-Solamy for his guidance and support.

The Deanship of e-Learning and the General Directorate of Information Technology organized a number of introductory meetings for new students and new faculty members. The purpose of these meetings is to provide new students and teachers technical training on the purposes, functions and methods of the university's electronic learning resources. Overall the aim is to improve the quality of instruction and create an enhanced learning environment for the students.

Training sessions included the use of 'Blackboard' for both students and teachers alike. Faculty members also received training on the design and implementation of e-courses using the prescribed standards set forth by 'Quality Matters'.

There was an online meeting for new students on e-learning systems on Monday, the 10th of Muharram. Topics covered included: e-learning concepts, e-learning systems at KKU, e-presence in both complete and integrated courses, e-learning services for students, accessing and exploring 'Blackboard', and virtual classrooms. Following the program was a question and answer session.

The General Directorate of Information Technology recently held a meeting to introduce and identify some of the electronic services available to the students on the university e-portal.

Training Program Supervisor, Dr. Mufreh Al-Bassami, said that building strong relationships among school principal, teachers, students and parents is vital. The training program helps the education students develop strategies for making those relationships work. The Asir General Administration of Education co-sponsored the training program and used its resources to encourage public and private schools in the region to participate.

The Academic Development and Quality Deanship will hold an intensive training program for new faculty members. The program will include 20 workshops and focus on quality and accreditation, principles and frameworks, pedagogies and strategies, and learning outcomes.

Dean of Academic Development and Quality, Dr. Abdulaziz Al-Hajri, explained that the program comes within King Khalid University's mission to develop the skills of new faculty members. He pointed out that the program will be delivered at both the main campus and Tehama branches.

The Medical Creative Club sponsored a lecture entitled 'The Resistant Doctor' by Abdulrahman Allaghabiu, a graduate of Wayne State University in the U.S.A. and internal medicine lecturer at King Khalid University. The lecture encompassed a number of topics and the event was well attended. Student Activities Director, Dr. Waddah Al-Alamy, stressed the importance of holding such meetings and thanked the club members for their efforts in providing programs that support medical students.

On this auspicious occasion, Vice Rector of Academic Development and Quality, Prof. Merzin Al-Shahrani, asserted that King Khalid University has dedicated substantial manpower and resources to ensure that programs selected for accreditation will meet the strictest educational standards. He extended his sincere gratitude to King Khalid University Rector, Prof. Falleh Al-Solamy, for his ongoing support and guidance in the development of quality programs in accord with Vision 2030, noting that the accredited programs will foster the conditions necessary for students to acquire the knowledge, skills, and capabilities that employers need in our knowledge-driven economy. Vice Rector Al-Shahrani took this opportunity to thank the employees of the Deanship of Academic Development and Quality for their efforts in cooperating with the various colleges, improving the university programs, and obtaining the full programmatic accreditation.

The NCAAA accreditation process focuses on eleven standards which are divided into five key areas, including:

In the presence of the Dean of the Faculty of Sharia and Fundamentals of Religion at King Khalid University, Prof. Mohammed Al-Shehri, the college vice dean and department heads, the Academic Guidance Unit held the first orientation day for new students. The aim of the two-day orientation is to shed light on the courses, programs and scientific sections offered by the college, to explain the required role of each student during this stage, and introduce all applicable regulations that are of interest to the student at the beginning of his university experience.

The orientation meeting was opened by a recitation from the Holy Quran, followed by a speech delivered by the Dean Al-Shehri, and a discussion session with Vice Dean, Dr. Ahmed Al-Husaini, Jurisprudence Department Head, Dr. Mohammad Al-Qarni and Dr. Awad Al-Shehri. Topics covered included but were not limited to the academic system, the college's activities, and the university services offered to students.